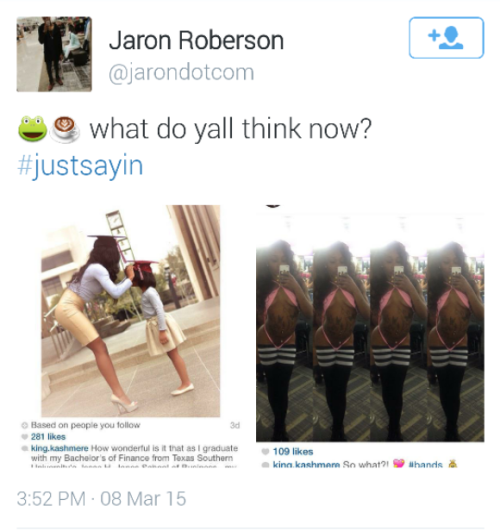 How do you earn respect?  Trick question.  You don’t have to earn respect.  Well you shouldn’t, and you should be leery of anyone who implies you do.  So anyway, the pictured tweet came across my timeline and it sparked debate about respect for women.  I police my timeline well so most of my followers were on the correct side of the debate while the legion of buckfoys and the women who let them use their cars were on another.  I considered engaging, but then I realized that I have no time for such tomfoolery and besides I’ve spoken on said topic before; even here.  What sparked this post that I didn’t feel like tweeting out was just my issue with “respectability” period, whether its a woman stripping her way through school, Kim Kardashian doing a nude shoot, a stranger setting her cakes out for the Gram.  It sounds much like famous black celebrity saying pull your pants up, don’t watch Love and Hip Hop, stop making babies out of wedlock, and give them proper names.  Even if there’s a kernel of truth to that these aren’t the greatest things to do, the jig becomes boreal because of one simple, poignant point….

THESE PEOPLE DON’T WANT TO RESPECT YOU ANYDAMNWAY 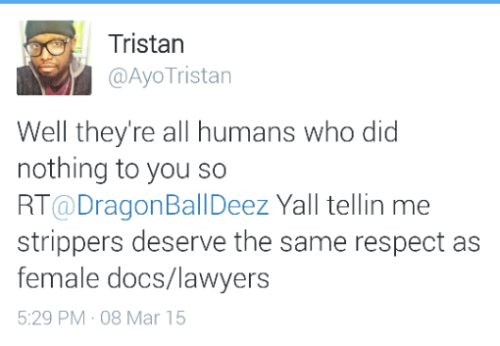 To quote Drake, muhfuggas never loved us.  And muhfuggas never loved these women. When you’re picking and choosing which “type” of woman warrants your respect while casting aspersions on the rest, you’re doing the same oppressive bullshit that has existed for centuries.  I wonder if the dude who tried to “expose” her bothered to find a respectable woman to praise; I doubt it.  In the same vein that there’s plenty of positive black television characters enough that I don’t want to hear shit about how Peter Gunz is setting us back.

Its pure vainglory to see strangers sit around and talk about how one must earn their respect. Who is you?  Its even worse to see women bend over backwards to show these strangers look how classy and low maintenance I am I’m not like those thots, or to see successful black men put on a Mountie hat and talk about how they are new black, or to see even see a black person who likes wine, Radiohead and reading for enjoyment carry on as if theyre somehow special or different.  For who, for what?

So moral of this rant, cut the bullshit.  There isn’t a rhyme or reason to your ignorance, misogyny or racism.  You’re just a fucked up person with a fucked up view of others and what makes it worse is that you think its on the other person to change to accommodate you.  Miss me with all that. Fin.